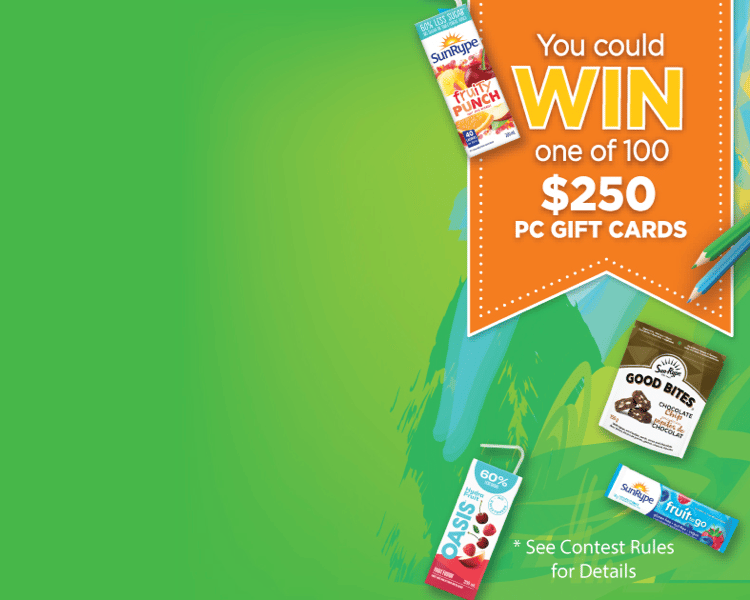 Back to School Pack Contest

You could WIN a $250 President’s Choice gift card to help you stock up for back-to-school!

2. Pickup a specially-marked SunRype Back to School Pack (while supplies last)

3. Locate your unique PIN# on the inside of your Pack

4. Fill in the entry form below for a chance to WIN!

There will be 100 lucky winners, so enter today!

To enter the contest, visit sunrype.ca/BacktoSchoolPackContest, locate the official contest entry form, complete all required fields including your PIN # and follow the online prompts to submit your entry. By completing and submitting the online form, you agree to comply in full with the Contest Rules, which are available at www.sunrype.ca/BacktoSchoolPackContest-rulesandregulations. LIMIT one (1) entry per PIN #. LIMIT of one (1) entry per person per day. No purchase necessary. Contest open to legal residents of Canada, excluding Quebec, age nineteen (19) years or older. Contest starts 12:01 am (Eastern) August 25, 2022. Contest ends 11:59 pm (Eastern) November 17, 2022. Chances of winning depend on the number of eligible entries. Each selected entrant must correctly answer a skill-testing question before being declared a winner. All participants must preserve their proof of purchase as well as the label on which the PIN # is written. There are one hundred prizes available to be won, each consisting of one (1) CND $250PC Gift Card. Conditions and restrictions apply

Participation in the Contest constitutes full and unconditional agreement with and acceptance of these Contest Rules, which are final on all matters relating to the Contest. The Contest Sponsor is Sun-Rype Products, a division of A. Lassonde Inc.

No Purchase Necessary. The Contest begins at 12:01 a.m. E.D.T. on August 25, 2022 and closes at 11:59 p.m. E.S.T. on November 17, 2022 (the “Contest Period”).
This Contest is open only to legal residents of Canada (excluding Quebec) nineteen (19) years of age and older. Employees, directors, officers and governors (and their immediate families and those with whom they are domiciled) of SunRype Products, a division of A. Lassonde Inc. and its subsidiaries, affiliates and agents, and its advertising and promotional agencies, are not eligible to enter. Contest is not open to residents of Quebec.

To enter, you will require a PIN #. Randomly distributed PIN #s are contained inside specially-marked SunRype Back to School Pack packs available, while supplies last, at participating Loblaws grocery stores in Western Canada and Ontario during the Contest Period.

Once you have located your PIN # in your SunRype Back to School Pack, during the Contest Period, visit sunrype.ca/BacktoSchoolPackContest and enter by locating the official contest entry form, completing all required fields including your PIN # and following the online prompts to submit your entry. By completing and submitting the online form, you agree to comply in full with these Contest Rules.

All participants must preserve their proof of purchase as well as the label on which the PIN # is written.

No purchase necessary method:
To obtain a randomly selected PIN # to enter the Contest without obtaining a SunRype Back to School Pack, eligible entrants may hand-print:

Prizes: There are one hundred prizes (each as “Prize”) available to be won; each consisting of one (1) CDN.$250 PC Gift Card. Gift cards are subject to any and all terms and conditions which may be contained thereon. Prize is not transferrable.
The odds of winning depend on the number of eligible entries received.

A random draw will be conducted at on or around November 21, 2022 (the “Draw Date”) to select one hundred (100) potential Prize winners.

Selected entrants will be notified by email or telephone. Before being declared a Prize winner, (i) each selected entrant must correctly answer a time-limited mathematical skill-testing question without assistance or the use of a calculator, administered at the time of contact, by email or telephone as determined by the Contest Sponsor in its discretion; and (ii) the selected entrant must sign a Declaration of Compliance with these Contest rules and a Release of Liability, releasing the Contest Sponsor from any and all liability in connection with: (a) entrant’s participation in the Contest; (b) the acceptance and use of the Prize awarded in the Contest; and (c) the administration of the Contest by the Contest Sponsor, including (without limitation) the selection of the Prize winner or the distribution of Prize awarded in this Contest, plus a publicity release permitting the Contest Sponsor to use their name, photo and city/town of residence for promotional purposes relating to the Contest. The Declaration and Release document(s) must be returned on or before the date indicated on the accompanying notification or the Prize will be forfeited.

Prize must be accepted as awarded and no prize substitution of cash or otherwise or transfer of the Prize will be made, provided that the Contest Sponsor may make prize substitutions of equal or greater value at its sole discretion. No telephone contact or correspondence will be entered into regarding the Contest except with selected entrant(s).

By claiming the prize, the selected Contest entrant agrees to consent in writing to the use of his/her name, image, photograph, voice statement(s) and city of residence, without further compensation, for any and all publicity purposes, commercial or otherwise, in all media used by the Contest Sponsor and its agents and each of their respective subsidiaries, affiliates, directors, officers, governors, agents, and their advertising and promotional agencies.

The Contest is subject to all applicable federal, provincial and municipal laws and regulations and shall be governed by the laws of the Province of British Columbia and the federal laws of Canada applicable therein.

Each Contest entrant agrees to be bound by these rules and regulations and all decisions of the Contest Sponsor, which decisions are final with respect to all matters relating to the Contest, including (without limitation) the selection of the Prize winner.

Each Contest entrant agrees to hold harmless and indemnify the Contest Sponsor and its agents against any and all liability, damages or causes of action (however named or described with respect to or arising out of either: (i) entrant’s participation in the Contest; (ii) the receipt or use of the Prize awarded herein; or (iii) the administration of the Contest (including winner selection) and distribution of the Prize awarded herein.

The following are prohibited and will result in automatic disqualification from the Contest: (1) using any method that artificially increases odds of winning; (2) non-compliance with these Contest Rules; and (3) any other act which the Contest Sponsor determines, in its sole discretion, jeopardizes the integrity of the Contest.

Contest Sponsor and its agents are not responsible for any printing, distribution or production errors, or for any late, lost or misdirected entries. The Contest Sponsor may terminate, modify, waive, suspend or withdraw from this Contest (and/or any aspect thereof, including methods for selection of the winners), in whole or in part, at any time without notice for any reason, without liability, in its sole discretion.

The Contest Sponsor and its agents shall not be responsible for tampering, theft, human errors (including gross negligence) ineligibility, lost, late or misdirected entries or for any problems, failures or technical malfunctions of any telephone network or lines, computer online systems or servers, computer software problems or traffic congestion on the internet or at any website. Contest Sponsor assumes no liability for damage to entrant’s or any person’s computer resulting from participating in the Contest or the failure of the Contest Sponsor to process any entry and otherwise award the Prize, nor does it assume responsibility for printing errors appearing in these Contest Rules or related Contest materials. In addition, the Contest Sponsor will not assume any responsibility of any nature whatsoever in all cases where their inability to hold the Contest or to remit the Prize to the winner results from a cause beyond their control, including Acts of God, weather conditions, strike, lock-out or other labour dispute to which a prize relates. Any attempt to deliberately damage any website or to undermine the legitimate operation of this Contest is a violation of criminal and civil laws, and should an attempt be made, the Contest Sponsor reserves the right to seek remedies and damages to the fullest extent permitted by law, including criminal prosecution.

Click here to view the contest rules in French: back-to-school-pack-contest-rules-and-regulations_FR